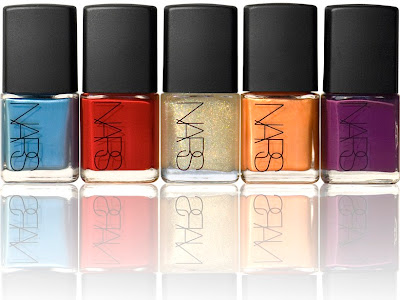 in honor of NARS' 15th anniversary, Francois Nars, founder and creative director of NARS Cosmetics, has resurrected some of the brand's long-lost nail polishes from the archives. if you missed the first time these were released, you can now, for a limited time, experience the signature high-gloss, extra durable formula in an assortment of five gorgeous, vibrant nail hues.

Cha Cha Cha (originally launched in 2001) is semi-sheer tangerine with gold reflections, it is as sensual and vivacious as the cuban dance it is named after

Tallulah (originally launched in 1998)- a slightly moody and entirely elegant shade of rich grape, gives tips a taste of the good life


i don't know about you, but i am dying to try them all! each is so unique and limited-edition goodies are always a good investment-- at least that's what i like to tell myself, LOL!

find these fabulous polishes at narscosmetics.com