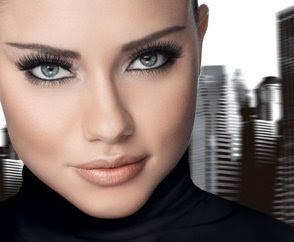 if you're in the market for a new mascara, this may be the one you've been looking for! Maybelline has released another mascara-- it's called XXL Extensions XX-Treme Length Microfiber Mascara-- and to my surprise, i must say. 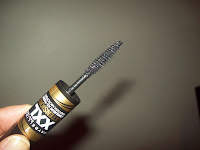 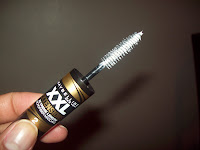 i mean they've already released Colossal Volum' Express Mascara a few months ago, to the love of many (including me), so i thought, it was a bit soon. ha! silly of me to think that of course- i am a beauty editor, i should know better!

i do admit, i didn't really like this at first. i actually used it for a few days, then put it away in my train case. a week later, i gave it another try.

boy, was my experience different.

maybe it's the whole thing with mascaras getting better after you use it a few times. who knows...

here's what i think now: i love this mascara!

as you can see from the pictures, it really does make lashes longer and fuller! even the mascara on its own works well, but with the basecoat, it is beyond fabulous! apparently, it's because it uncrosses unruly lashes and locks them into place, helping the mascara give you the best lash look.

pick this up, and i promise, you will not be disappointed!

available in brown, soft black and very black at a drugstore near you!

hi i was looking for XXL review, i found yours.
Thanks, this helps!

Hi! I was wondering: what drugstore did you buy this mascara at? I've looked through the websites of Rite Aid and Walgreens and I can't seem to find it on their site... maybe at the store it's different? It would be soo helpful, if you could tell me!
Thanks so much, and great review!

*Anon-- as far as i know, it's not for sale online yet. i have seen it in CVS and RiteAid (where i live), and i bought mine from Target. :)

as expensive as it is, the mascarra is clumpy and gives u spider lashes

anon- sorry you didn't have a good experience with it...

Thanks for this posting :) I totally link everyone to it so they can see your pictures- this mascara totally does the same thing to my lashes and I love it!

Wow, this is exactly what I'm looking for in a mascara (length wise). Looks just like falsies! How is it for drying out though? I've heard it doesn't last long...