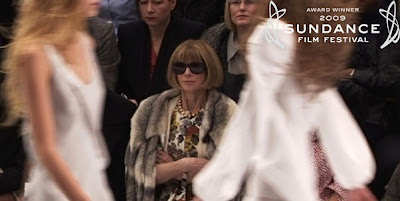 the film, The September Issue, which i shared information about with you a couple of weeks ago, won the Grand Jury Prize for Excellence in Cinematography at the Sundance Film festival. now i don't know about you, but the more i hear about this movie, the more i want to see it!

Anna Wintour, editor of Vogue for 20 years, is the most powerful and polarizing figure in fashion. larger than life and more complex than fiction, Wintour embodies a fascinating contradiction of passion and perfectionism as she reigns over a dizzying array of designers, models, photographers, and editors. 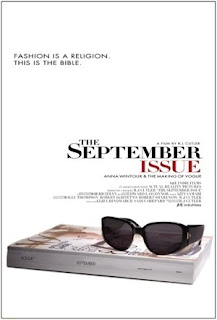 director R.J. Cutler delivers a rare insider account of the nine months leading up to the printing of the highly anticipated september issue of the magazine, which promises to be the biggest one ever. he takes us behind the scenes at fashion week, to europe and back, on shoots and reshoots, and into closed- door staff meetings, bearing witness to an arduous and sometimes emotionally demanding process.

at the eye of this annual fashion hurricane is the two-decade relationship between Wintour and Grace Coddington, incomparable creative director and genius stylist. they are perfectly matched for this age-old conflict between creator and curator. through them, we see close up the delicate creative chemistry it takes to remain at the top of the ever-changing fashion field.

Cutler cleverly deconstructs the creative process as it plays out in the hallowed halls of Vogue, lined with racks of couture. in The September Issue, his access and insight are impressive and make us aware that he is offering us a privileged glimpse into a world many dream about but few see.


here's a short clip from Sundance that features both Anna Wintour and director R.J. Cutler sharing their thoughts on making this film, from the process to the finished piece.