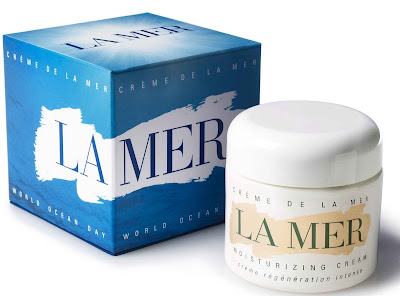 in honor of La Mer's sea heritage and continued support of Oceana, the world's leading international ocean advocacy organization, the company is proud to announce that as part of this partnership, La Mer has designed a limited-edition 250 ml (8.45 oz) "World Oceans Day" Creme, with 100% of net proceeds going to Oceana.

"i used to think the biggest threat to our oceans was pollution before i met the dedicated team at Oceana," shares Andy Bevacqua, vice president of research and development, The Max Huber Research Labs and Oceana Ocean Council Member. "but after spending time with Oceana scientists and on board the Oceana Ranger, i think an even bigger threat is overfishing. in the collaboration between La Mer and Oceana, i have come to understand that the only way we will get things done and make real change is if the three prongs-- the government, NGOs, and industry-- all work together. we all have a common goal."


La Mer's collaboration with Oceana began in 2005, and this is the second year that La Mer and Oceana have partnered to raise awareness for World Oceans Day, june 8th.